I started growing a beard on October 30, 2013, just a couple weeks after I learned that my Grampa Ray was diagnosed with prostate cancer. I had first heard about the concept for No-Shave November the year before and wanted to do something for him.

No-Shave November is “a month-long journey during which participants forgo shaving and grooming in order to evoke conversation and raise cancer awareness.” When I looked it up a couple years ago, the majority of the cause seemed to be focused on generating donations and interest to help find a cure for prostate cancer. To participate, you are supposed to stop using a razor for 30 days and donate all the expenses you would have spent on facial care to help fund prostate cancer research. It seemed like a decent idea.

I was almost 30 years old and had never let my facial hair grow more than a few days, mostly because I just didn’t think it would work. My 5-o’clock shadow usually took a week, and even that didn’t show much potential for full facial coverage if I decided to extend my razor’s inactivity. I didn’t have confidence that my face had the capacity to grow a full beard, so I never really gave it much thought. I figured I had a pretty good reason to try this time, so I donated $50 to the Prostate Cancer Foundation in Grampa Ray’s name and gave it a shot.

After getting past a patchy couple months in the early stages, I eventually succeeded in growing a real, honest-to-goodness beard. It was magnificent. I started to notice other beards out in the world and would always be greeted with a slight nod of recognition for our mutual accomplishment. I learned that beard people were good people. We all shared an unspoken language, and that language was beard. I kept warm in the winter, made new friends, and received the first appearance-related compliments of my life because of my new beard. It made me happy, so I kept it going.

Once November was over, I had to begin saying “I started growing my beard for No-Shave November” instead of “I’m growing my beard for No-Shave November” and I was surprised at just how often the subject still came up. I mean, it was literally right in front of my face, but I didn’t realize how much of a conversation piece it would become. People who knew me were interested in why I changed, and strangers were interested because it looked so darn cool (I assume). I eventually realized that I was having that conversation several times each day and proving the concept of “No-Shave November” in a direct and personal way.

I started getting more excited about being asked the question and, occasionally, actually convinced someone to take action. I made funny business cards that linked to a fundraising website and passed them out to anyone who asked about my beard. One guy cried and shook my hand because he had found out his father had been diagnosed with prostate cancer the day before and was glad I was doing something to help. I convinced a few men to grow beards of their own and tell everyone about the cause. Four people donated money to the Prostate Cancer Foundation through a link on my website. It wasn’t much, but it was something. I also had a sweet beard, so it was really a win-win for everyone. 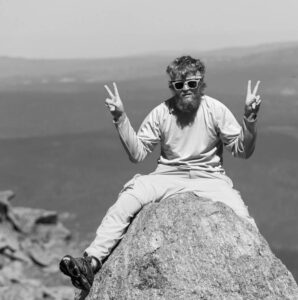 My beard on a mountain, home of its ancestors.

When people asked how long I planned to keep my beard, I told them I knew when I’d shave, but I didn’t know when that would be. I didn’t offer any other clues and loved the confused reactions I got from people when they asked. I knew the answer was intentionally confusing because I tied my shaving to an event with an unspecific date, but it was a fun little game to play. I always knew what would cause me to shave, but I just didn’t know when it would happen. Unfortunately, it happened. Grampa Ray died on November 29, just six days after his 90th birthday.

I had promised myself that I’d keep my beard as long as Grampa Ray was alive. Now, with his passing, I have given myself permission to shave and I realize that I don’t really want to go through with it. Though my beard looks rough and imposing, it is really quite soft and eventually makes friends with everyone. Its a friendly beard trapped in a grizzly beard’s body. There have been times where the beard would become annoying or stubborn or just plain mean, especially in the summer, but I still love it. As anyone who ever met Grampa Ray can attest, it seems like the perfect reminder of him.

I don’t have as many conversations about prostate cancer awareness as I used to when my beard was new, but they still happen. I let my fundraising site’s domain name expire when I ran out of business cards, but I still donate to the Prostate Cancer Foundation in Grampa Ray’s name. You should donate, too. I always think of him whenever I can’t eat soup like a normal person. For as much as I might sometimes look forward to a clean shaven face, every tiny struggle, and success, I have with my beard just makes me smile and think of Grampa Ray. It’s only been a week, but I don’t really see how that changes now.

I think I’ll keep my beard a while longer. 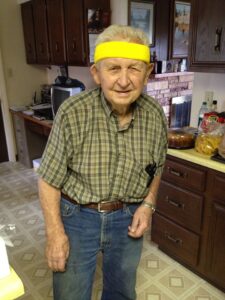 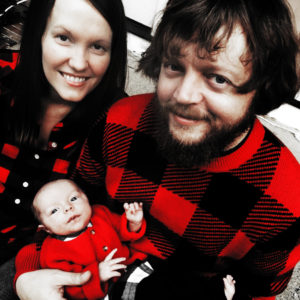