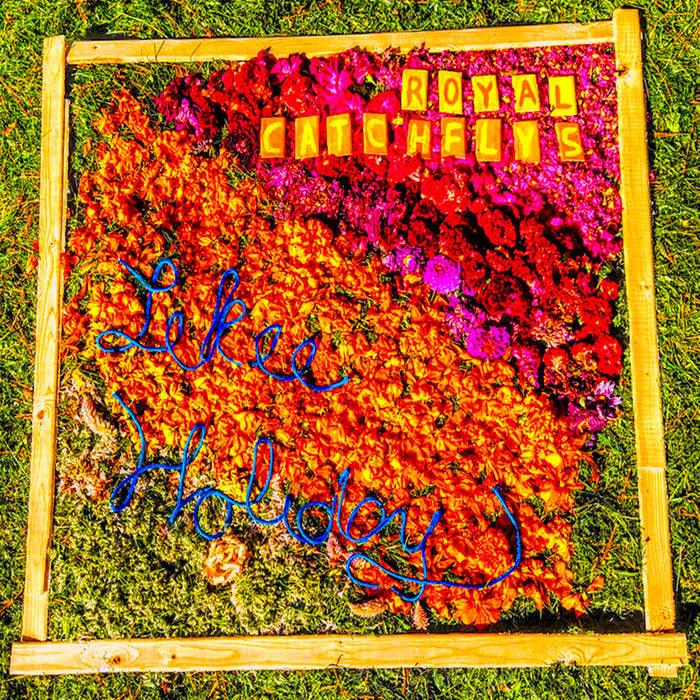 Made my first album/song cover art for a friend’s band! Wasn’t exactly what I planned when I started, but I think it turned out great. The song felt like Summer to me, so I made a Summer sunset out of grass and flowers.

I asked a local swap/donation group on Facebook if anyone had any flowers growing in their yards and didn’t mind if I came by to collect them, and three folks helped!

The original idea was to put the band’s name and the song’s name in rope, with white rope over the pink/purple flowers in the top right and blue rope over the white/orange flowers in the bottom left. I had glued and laid out the letters with white rope a few days before I got the flowers, hoping I could just lay the string down on the flowers when it was time for the photo. Seemed like a great idea, but the whole thing fell apart as soon as I took it out of the clamps. The string was still stiff from the glue, though, so I had to scrap that idea.

I only had an hour or so before the petals wilted, so I used the rest of my blue cord for the song title and came up with a new plan for the band name. I cut some scrap rip cuts from a 2×4 into 3.5″ pieces, painted them yellow/orange, added the letters, and hoped it would match the orange flowers well enough to make a cool contrasting color over the pink/purple section. I figured orange on pink is usually so hideous, it would have to stand out well.

I had planned the photo for noon so I could get the best light, but a few delays meant I had to deal with some shadows that weren’t supposed to be there. I spread everything out over a 4×4 pallet to make a “canvas” for the flowers and used ripped sections of 2x4s for the frame. At first, I thought putting the lawn trimmings on the pallet was unnecessary, but it was vital when I had to relocate the pallet to get better lighting. I upped the brightness and saturation in edits to make it the colors stand out more and think it turned out really well!